Brian Brown, in his recent post-dinner debate about gay marriage with Dan Savage, used one of those arguments used so commonly that it belongs on this chart: “If we legalize gay marriage, why not polygamy?” To gay marriage proponents, this point seems not only overused and offensive, but also bizarre. As Dan Savage noted in the video, it doesn’t seem like the job of the same-sex marriage activists to weigh in on the question of group or multiple marriage. “Let the polygamists deal with that one!” he says. Why is it relevant at all what will or won’t happen with polygamous marriage? The question of gay marriage is about why two consenting adults of the same gender shouldn’t be able to enter a legal pact with rights and responsibilities, just like couples of different genders. It’s a civil rights issue! Discussing polygamy in a marriage equality discussion is obviously an example of the Slippery Slope Fallacy. 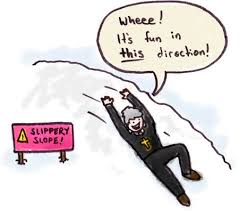 But as Yvain reminds us, having a silly or low-status name for something doesn’t make it wrong. And I think the Slippery Slope “fallacy”, since it amplifies our positions in a certain direction, is an excellent tool for figuring out exactly what we’re arguing for, and on what grounds. Gay marriage proponents tend to argue that the traditional definition of marriage is inadequate. We say that marriage should be based on the loving commitment people are ready and willing to make to each other, and further, that the law ought not to discriminate between straight and gay people. Given that understanding of marriage, the traditionalists are right to ask why we don’t then approve of all marriage that fits that definition, including group marriages or polygamy. Might seem ridiculous, but bear with me.

Skeptical Jesse is skeptical of my argument.

It’s as if I told a friend, say, Jesse (who gets a major shoutout for all the help he gave me on this post), that I thought taxes should be lowered on the poor and raised on the rich, because the immense income inequality in our country isn’t fair. Based on my argument, that fairness is the goal, he would be right to ask why I wasn’t in favor of a tax code that makes everyone’s income equal. That’s because I haven’t told him that I think fairness is a goal that must be tempered with economic productivity, or the kind of fairness in which people get to keep what they make, or something else. So even though it sounds like he’s making a reductio ad absurdum/slippery slope fallacy to mess with me, he’s totally right.

Similarly, if all traditionalists know is that gay marriage proponents think that nondiscrimination and the desire to have the state recognize a life-time loving commitment are the basis of marriage equality, then there really isn’t a reason why multiple people who love each other shouldn’t be able to get married. Replacing ‘everyone can get married to the opposite sex person of their choice’ with ‘everyone can get married to one other person of their choice’ doesn’t seem like much of an improvement in some hypothetical society where polygamy is really on the table. Gay marriage activists have a political and intellectual obligation to answer the damn question.

In fact, to be really rigorous, we have to answer a few questions. (Gay marriage opponents should, ideally, be able to answer them, too).

1. What is marriage, in our current society?
2. Broadly speaking, how did it come to be that way? (Marriage as a chestertonian fence)
3. What state or societal functions does or should it serve? (What interests does it serve?)

Luckily, there are plenty of useful, reasonable answers, which will not only placate the Defenders of Marriage, but clarify your own stance and give you a rational grounding for your policy proposals. Which shall it be? (NB: I won’t always address #2 in these responses, because that takes much longer)

1. Marriage is a social recognition of lifelong bonding combined with a structure that allows for a stable environment for children. It comes with rights and benefits. There’s nothing in that that requires only two people, so I do support polygamy. That’s the next step.
Pros: consistent. Cons: Probably won’t win so many points with the traditional marriage crowd.

2. Marriage is an institution that (comes out of a patriarchal and oppressive tradition/used to be important for property issues/other) but serves no use now except to (increase government power/privilege some forms of sexual or romantic relationships) so there should be no marriage at all.
Pros: Also consistent. Cons: Really? What about kids? Also, what are you doing advocating for marriage equality at all?

2, edited. Marriage is an institution that (comes out of a patriarchal and oppressive tradition/used to be important for property issues/other) but serves no use now except to (increase government power/privilege some forms of sexual or romantic relationship) so there should be no marriage at all, but given that it exists, gay people should have it, too.
Pros: Practical. Cons: A pretty cynical way to look at politics.

3. The state has a compelling interest in producing stable family structures. The best way we know of to do that is with two people legally becoming kin, but the gender doesn’t appear to matter.
Pros: Practical, and based on state interest, which is always a plus. Cons: Depends on a piece of evidence (what the most stable structure is) that could change in either direction. That’s fine, just a little unstable.

4. Marriage is a social recognition of stable lifelong bonding combined with a structure that allows for a stable environment for children, but polygamy comes at too high a cost because we would have to totally restructure our (tax system/custody system/etc.).
Pros: Convenient for political argumentation. Cons: Pretty weak argument, if you ask me.

5. The state has a compelling interest in producing stable family structures, and polygamy isn’t one of them. It comes with the potential for a society in which high-status men have tons of wives and low-status men don’t have any. Too problematic. (There might be other similar reasons why a polygamous society would be a bad idea).
Pros: Probably the most forceful argument against polygamy. Cons: Dependent on a potentially irrelevant historical fact about polygamy, not clear at all that such a society would come to pass.

There are likely many more potential responses, and these have plenty of problems, but they are a start. They help us understand, not just what we do or don’t like about polygamy, but why we believe what we believe about the legalization of same-sex marriage.

Note: This applies to tons and tons of other issues, from abortion to foreign intervention. Slide down that slippery slope and let me know in comments where you end up!

10 thoughts on “Gay Marriage and Polygamy: Why the Slippery Slope Argument Isn’t as Wrong as you Think”