Research2BeDone has put his finger on what I agree is the most fundamental problem facing those trying to discuss social justice issues with people who aren’t familiar with the concepts involved: large inferential distances. Inferential distances are those gaps between our knowledge and the knowledge of others that make it hard to convey ideas. The example given over at Less Wrong is:

Explaining the evidence for the theory of evolution to a physicist would be easy; even if the physicist didn’t already know about evolution, they would understand the concepts of evidence, Occam’s razor, naturalistic explanations, and the general orderly nature of the universe. Explaining the evidence for the theory of evolution to someone without a science background would be much harder. Before even mentioning the specific evidence for evolution, you would have to explain the concept of evidence, why some kinds of evidence are more valuable than others, what does and doesn’t count as evidence, and so on. This would be unlikely to work during a short conversation.

Similarly, one SJ-oriented friend might be able to convey to another SJ-oriented friend why complaining about the term “cisgender” on the basis that the term is stolen from chemistry is problematic with a single step. They don’t have to explain about the way labels can empower or how words can do harm or how derailing works or what cisprivilege is, let alone privilege in general. They can just allude to all of that shared knowledge and assume it’s understood and believed. For the mathematically minded, all the lemmas have already been shown, and from there the theorem is a one step proof.

But without being able to assume all of the information, ideas and analysis that go into the Social Justice™ system, it’s much, much harder to explain what’s going on. In fact, you can’t do it directly at all. To properly make the argument, some patient and charitable soul would have to start from the beginning, the core axioms, work through all the basic approaches and forms of analysis, arguing all the way that they are legitimate and worthwhile, then showing how they apply to the situation in question, and hoping desperately that they’re still paying attention by the end. And that’s in the best case scenario, where it doesn’t disintegrate into slurs, derailing or unproductive mud-slinging before the explanation is over. Just like in math.

It seems unfair, of course, that in order just to convince someone to stop believing harmful and incorrect things, that much work has to be done. The answer seems obvious, if you already have all of the knowledge, information and assumptions. But from the other side, it isn’t at all. In fact, it’s not rational to find it obvious. Without an explanation that starts with assumptions that are in fact shared, someone who doesn’t currently agree with our fictional Social Justice Warrior doesn’t have reason to believe what they’re being told. Just as so many creationists disbelieve science because it rests on the concept of the scientific method (which they do not accept), and mathematicians dismiss proofs that require unproven assumptions (except the unproven assumptions they like), this non-SJ-er must reject the notion that “cisgender” should be a required part of hir vocabulary. (Much like hir). Note that mathematics and creationism have somewhat different truth values. It doesn’t matter; this is still how it feels from the inside to believe some things and not others.

How do we change that belief? More specifically, “How does one go about helping everyone on either side of an inferential distance gap understand each other?”

By bridging the gap! Get rid of it entirely, by meeting the person you’re talking to where they are.
The following steps provide a guideline (much of which is laid out originally here):

The tips might look intimidating, but the important part has only three steps. It’s really that simple. It’s hard to be perfectly persuasive all throughout the argument, it’s hard to make an argument that extensive, and it’s frustrating to do it over and over again. But it is simple. For those willing to do it, arguing with people who have entirely different assumptions is just the task of laying out a path, slowly but surely, from one set of beliefs to another. 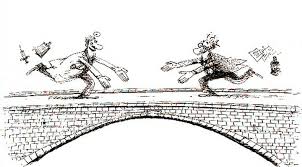 I do not deny for a second that it can seem like a waste of time, that it can be painful, and that rather more often than we might hope, the people we’re arguing with are not arguing in good faith. That is why we leave it to individuals to decide whether it is worth their time and effort. But those not willing to do this kind of work should not stand in its way. They should not base their arguments on assumptions others do not share and be surprised when they are not understood. They should not make it more difficult for others to do the challenging work by interrupting ongoing conversations with jeering and mockery. And most of all, while there are perfectly good reasons to stop being able to have a conversation or to not enter one in the first place, no one should engage in arguments with people who might be persuaded if they have no intention of taking the process seriously. Ideas rise and fall every day in the public sphere, and there’s no reason to lose arguments or adherents because some don’t think the work of public reason is worth doing properly.

3 thoughts on “Bridging the Gap: Inferential Distance and Social Justice”