(Reading my last post on hedgehogs and foxes is useful, but not at all required, to understand this post)

When I was younger, I used to be obsessed with the phrase “logically consistent worldview.” I really, really wanted one. It seemed like the kind of thing that good intellectuals needed to have if they were going to properly navigate the world. How could you even begin to respond to an event if you didn’t have a fully integrated ethics, metaphysics and epistemology? Sounds silly, I know, but the wikipedia article on Weltanschauung (worldview) became very important to me. I constantly made lists of what I believed at any given time, and what I was still working out. I even began trying to fill out this set of required building blocks for a worldview:

I actually tried to have an answer for every single one of these. And what I figured out quickly was that it was incredibly hard. I would literally be kept up nights worrying about how I was going to reconcile environmentalism and a progress-appreciative attitude towards human society and civilization, or how I as a feminist was supposed to feel about breast augmentation surgery. “The environment matters!” I would say to myself. “But we can’t take a conservationist attitude,” I would also say.” It’s inherently conservative and stops us from making bigger and more technologically advanced cities! And maybe technology would make things more environmentally-friendly, if given the chance!” And then choice! Feminism is about choice! So women (/transmen, but I wasn’t that sophisticated then) should be able to do what they want with their bodies! But feminism can’t accept all choices, or what would be the point? Shouldn’t stop women from objectifying themselves? How can I support a cosmetic surgery that just makes women more sexually available to men? But also shouldn’t they be able to do that if they want?

It was an all-consuming, constant intellectual project. I would apply my model to new things, and it would work, and then work, and then every so often, not work, and I would watch it crash and burn. Then I would be uncomfortable and agitated until I came upon an epiphany wherein I could bring all of the parts together and once again have a unified model.

What was my problem? I was trying to be a hedgehog. Trying very, very hard, in fact. I wanted a perfect, consistent model to explain and respond to the world. I wanted to understand it.

But in being beholden to a fundamental idea like “feminism is about choice”, I was either stuck when I hit things I would really rather not call feminist, or I had to somehow incorporate more than one fundamental idea together, which almost always causes problems.

(For people who know ring theory: It’s like trying to have a principal ideal with two generators. Doesn’t make sense)

If feminism is about choice, it partitions the world into two categories, feminist and not feminist. And if feminism is fundamentally about some other thing as well, we have another partition, which generally doesn’t map perfectly onto the first one (or there would be no point in having two). So now we have things that aren’t feminist in either sense and things that are feminist in both senses. Easy enough. But what about the things that are feminist in one sense but not in another? Either you have to start creating complicated rules about how the rules interact with each other, or you give up the crystalline, rule-based way of looking at things. Then you get to say that, according to your values, this kind of approach is X amount important, and this policy, according to the facts, helps women Y amount, and so on, and then form reasoned opinions about what will work out best, instead of what fits the model best. And that’s my concern with all hedgehogish systems. Now, maybe I just didn’t alight upon the perfect model, or I didn’t work hard enough. But hedgehogs seem to want dichotomies and trichotomies, things that are in the set or not, ideas and facts that play off each other in rigid, predictable ways. And while I’d love those things too, they haven’t presented themselves to me.

The world, instead, seems to be far better modeled by spectrums, where things are mostly different in degree and not in kind, where ideas can be balanced against each other, where multiple seemingly contradictory facts can be true, if they’re carefully defined and discussed. Instead of irreducible descriptors like “liberal”, “just”, “feminist” and “environmentalist”, switches that are either on or off, I have knobs and sliders, continuous things that can be sort of true, or mostly right, and I am so much more comfortable with that. New things I didn’t know before make me update my position, shifting knobs bit by bit, sliding along continuous functions until I’m just where I want to be, with the full knowledge that I’ll have to move again. Say what you will about it, it’s much more comforting than the worry that one new idea could bring my entire palace crashing down around me as I plummet into the chasm between discrete points.

The right color is somewhere in here….

I’m reminded of something a friend said to me once:

“If Osama bin Laden and I met each other, we would have nothing to say to each other.”

That is, hedgehog systems, totalizing systems that have something to say about everything, can’t interact with each other. They agree on some things, disagree on others, but there aren’t really ways to combine them fruitfully. The best you can hope for is non-overlapping magisteria (NOMA), where each system just stays within its own sphere and no one unbuckles their seatbelts and starts poking their sister.

(If people want to hear my model theory analogy for this, they’ll have to ask for it 🙂 ).

Plug in whatever appropriate for “religion” or “science”

That’s not enough for me. I want all the facts and values to get together and party. I want to knock down the jenga towers of ideology, and make every building block of every belief pay rent. I want to see which ones are true, or better yet, how true each one is.

I guess this is really all to say that I have become much happier and more comfortable in my beliefs since I became a rationalist and a utilitarian. I am now beholden to no specific thought structure or approach. Anything that gets the right answer goes. (Ideally speaking, of course. In reality, I am as flawed in my thinking as anyone else). And that means I’m so much more comfortable changing my mind, since I’ve linked my identity, not to a position, but to the pursuit of the right answer.

What’s especially great is that I don’t feel that I’ve lost anything. All the beliefs I had before, I can have now. Mostly, I have to ensure that they are suitably translated into empirical statements, so that each part of each belief can be examined separately. But their content remains the same. And as it happens, I don’t have any obligation to translate them that way. If the hedgehog form of atheism works for me, if I like it, if it gives me true and correct beliefs about the world, great. It’s mine for the keeping. Hell, I spend a lot of time immersed in religious thinking, and it works for me. But there’s nothing I’ve had to give up in my quest for foxishness, except what was untrue to begin with. And of course:

Some might say that rationalism and utilitarianism might themselves be the kind of Big Idea I claim to be trying to avoid. But I don’t see them that way. They are lenses through which we see things, certainly, but as I’ve just said, they don’t prevent us from seeing things in other ways. For instance, I find that utilitarianism allows me to still acknowledge that I care about fairness, beauty, and other fuzzy values in a way that other moral systems don’t. Furthermore, they don’t bind us to the narrative-based way of looking at things that has struck me as so problematic throughout this and the last post. Accuracy of belief depends on relying on more strategic, more empirical approaches, and that’s what matters to me.

I want the right answers to all the questions about the world: small ones, big ones, ethical ones. And for those, it seems, we follow the fox. 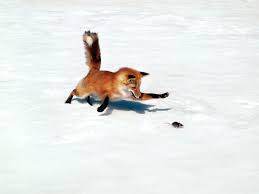 I mean, he seems to know what he’s doing.

One thought on “A Personal Journey to Rationalism”